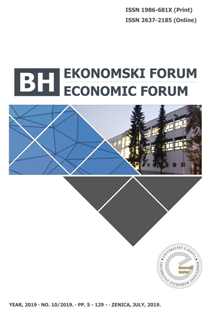 Structure of each economy, especially those in transition, is in constant change.
Shift-share analysis is widely used for studying of regional economic change. The
model in which the present analysis is conducted has three components: (i) the national
growth component (in this paper the entity level of Federation of BH is used
as reference level), (ii) the industry mix component, and (iii) the competitive component.
Each of them is measured on the basis of employment. The analysis enables
assessment of economic performance of a region (here cantons) in comparison to a
reference level (here the Federation of Bosnia and Herzegovina).
In this paper authors aimed at capturing economic change at regional level. Authors
have compared the economic change in two time periods, 2006-2011 and 2012-2018.
Changes in employment are expected in a small transitional and open economy such
as Bosnia and Herzegovina. Obtained results indicate that regional economy went
through considerable transformation. Some policy recommendations for policy decision-
makers in the fields of education and labor market are also given in the paper.