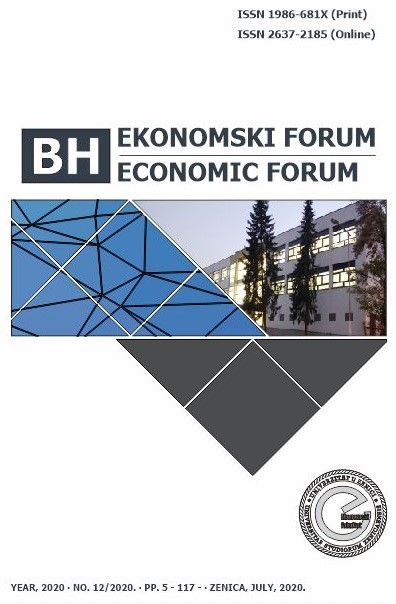 Economic growth is one of the most important concepts in the world economy. Although some authors critically believe that the level and rates of economic growth do not necessarily reflect the actual standard of living, it remains the main way to measure a country's well-being. Different views on the topic of economic growth, as well as the factors that influence it, have been present throughout the history of economic thought from the very beginning.

Unlike many theories of economic growth, which believe that in the long run there will be diminishing returns on factors of production such as labor and capital, Paul Romer in his theory of endogenous growth believes that technological progress, through knowledge accumulation, idea creation, and innovation, leads to increasing returns, and thus contributes more to long-term economic growth, unlike other factors.

In this paper, on the example of economic growth in B&H, it was tested the hypothesis that the activities of knowledge-based services contribute more to the gross domestic product, compared to other sectors. To prove the hypothesis, a multiple linear regression model was made based on a time series of 48 consecutive quarterly values ​​of B&H gross domestic product and sectoral gross value-added according to the income and production approach. In the model, activities were grouped into those that are predominantly labor-intensive, knowledge-based services, personal and social services, and other activities.

The results showed that the average value of gross value added per worker employed in the sectors of knowledge-based services has a 2.5 higher contribution compared to a worker in the labour-intensive sectors and a 2.47 higher contribution compared to one worker in the personal and social services segment. Also, tests of the implemented model show that additional employment in the sectors of knowledge-based services leads to accelerated economic growth in B&H.